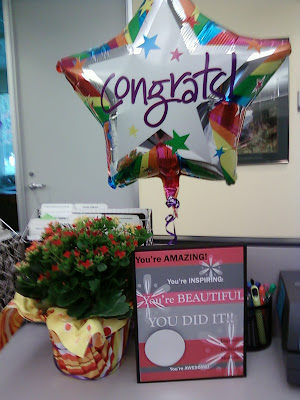 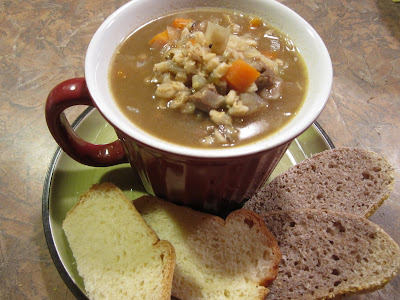 It's fall again, I can no longer wear my flip flops to work, and not just because my pedicure is starting to grow out, but because my toes turn an unfashionable shade of blue. That and "flip-flop" turns into "squish-squash" because of the rain, and then there are those weird looks from people who think maybe I should be the recipient of a Salvation Army box for the upcoming holidays. I miss the sun and the warm (only because in Oregon it's rarely so hot that, in order to keep cool, you'll make unfortunate fashion choices like daisy dukes and a tube top at ages that are nearing the Basic Rule and weights that are only admirable in a pumpkin growing contest), but am delighted that we're back to "soup weather". I LOVE SOUP, even if some think it's "Gramma food" - put that in your pipe and smoke it.
Soup was not a staple growing up, that is unless it came out of a can or was being used to empty the coffers of a large number of vegetables that would have been better off on the compost heap. My dad did not like most veggies...he was pretty picky, and when Mom started including them in our food as "vitamins", she frequently had to make him "special" dinners that would have made Jack LaLanne blanch in horror. (Jack was like 150 years old, and still appeared to be in his 60's...all due to exercise, vegetables, and pulling boats around in ice cold water...look him up) For us there was no escape...you ate what was put in front of you, and if it happened to be some kind of soup with many veggies blended up in it in a failed attempt to trick Dad into eating it, you only hoped that there was ketchup on the table to help you choke it down. It was especially egregious when Dad was sitting pretty at the head of the table, wolfing down a steak sandwich or a hamburger steak with mashed potatoes - how RUDE.
The other experience was Campbell's....most of the time it was tomato, chicken noodle, bean with bacon, or cream of mushroom, all of which I loved, but a far cry from homemade, stick to your ribs, full of flavor, meaty and satisfying soup that I am now a proponent of. Yesterday, thanks to a score on some reduced beef roast (did you know that when it's older it has more flavor, and that's how they age premium steaks? True story....) and a shopping trip that included half a cart full of just produce, I decided to make a HUGE batch of one of our favorites. AND it's good for you and only 3 points plus per cup - and it will produce a TON of leftovers that can be refrigerated for many other meals, or even frozen. And soup is always better as it ages....somehow flavors just multiply, not unlike bunnies or Catholics prior to the 1970's. And it is so comforting to eat hot soup on a cold day....kind of like a sweater, but inside your tummy instead of outside. Just beware of leaky spoons....a napkin tucked into the neck of your shirt is less gauche than soup splotches from your collar bone to your navel.
Beef Barley Soup
It's REALLY thick....if you like it more soupy, you can add more water and beef base if you want, maybe less cabbage or veggies, but you're missing the point. VEGGIES ARE GOOD FOR YOU!
23 oz. lean beef, cut in small cubes about the size of your little fingernail.
1 T. oil
1 large onion, diced
3 large carrots, diced
4 stalks celery, diced
3 cloves garlic, pressed or minced
3 C. chopped mushrooms (fresh or I use the dry mix, reconstituted in hot water)
1/4 C. red wine (optional, I just think it gives the broth more depth)
1-1/2 C. barley
12 C. hot water
3 T. beef base
1 T. salt
1 tsp. fresh ground pepper
4 C. diced cabbage
1-1/2 C. diced yellow squash
Heat oil to smoking over medium-high in dutch oven or stock pot, add beef and let sit until it gets a good sear on one side, then stir and allow to sear again. Add onion, celery, carrot and garlic and stir occasionally, about 10 minutes or until onion and celery softens. Add wine, barley, water, beef base and salt and pepper and stir; bring to a boil, then add cabbage and squash. Bring to a low boil, then simmer for 1 to 1-1/2 hour or until beef is tender. Adjust seasoning as needed.
Yes, it's that simple....and you only got a cutting board, a knife, a pot, and a spoon dirty. And if you serve it with some of Creative Daughter's multi grain and Son #2's potato buttermilk breads, it will make you feel like you put on wool socks, a soft Grammy sweater, and burrowed under a cozy fleece blankie in front of a roaring fire....if it's summer, you may want to crack out the daisy dukes and tube top. Or maybe just take a nap....
Posted by Momma Moose at 5:06 PM No comments: 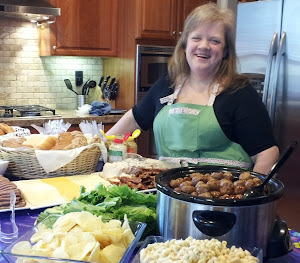